We'll be playing two sets and upright bass player BRAD HALLEN will be joining us for this show! Wednesday night, August 10 at 7pm as part of Easton Shovel Town Cultural District’s FREE Summer Music Series. Bring a chair or blanket. Concert is in front of the Hall. Food and drink will be available for purchase. Keep cool with Shovel Town Brewery. Try your luck at a 50-50 raffle! #eastonmass Brought to you with generous grant funding from Mass Cultural Council and sponsored by Bank of Easton, North Easton Savings Bank and Shovel Town Brewery. Also a big thanks to ECAT for filming. The concerts are broadcast live on Comcast 9 and Verizon 22. You can also view on the ECAT website.

Upright bass player John Ryder will be joining us for this show.

Hopkinton Center for the Arts summer concerts will take place in the outdoor amphitheater. Bring a blanket or lawn chair and snacks and get ready to have a great time. Food trucks and artisan vendors will be on-site. Alcohol and controlled substances are not permitted. You can purchase beer or wine on site.

All music concerts are FREE or "pay what you can" basis.

Note: In the event of rain we will bring the concert into the Delbridge Performance Space and seating will be first come—first serve, until we reach capacity.

HOLLISTON DAY (Sponsored by DELL Technologies) — Residents from Holliston who attend this concert will get a free gift!

In an effort to be accessibile as possible—Hopkinton Arts Center will be offering this concert on a pay what you can basis. Tickets range from $0 to $25.

Tickets go on Sale Friday, March 5, 2022. Get 'em at this link: https://www.blueoceanhall.com/news/943/74/Sal-Baglio.html Doors open at 7pm....show starts at 8pm. About the Show: Bird Mancini opens the show with a dynamic, uptempo set then Sal and his band takes over and rocks the Blue Ocean!

The Stompers 1977-2021 are no more. But for fans of founder Sal Baglio, as he, in his many musical guises, has created yet another way of sharing the sublime gifts of his cross-genre devotion to rock and progressive pop. On June 18, his new amalgam, “The Sensational Roller Coaster Ride,” will appear at the Blue Ocean for "a sexagenarian love fest for hip swingers.”

Where The Stompers left off, Mr. Baglio and his luminaries will carry the torch with, "a feedback moan with a four on the floor roar and backbeat!” Drawing from the deep well of his forty five plus years as one of New England’s prominent composers and performers, get ready for songs from The Amplifier heads, The Stompers as well as a few choice songs by artists that have inspired and have become part of Sal Baglio’s musical DNA. It’s new and old at the same time; heart stopping and thoughtful—what we’ve come to expect from Mr. Baglio.

Billy & Ruby will be joined by John Ryder on upright bass!

Electric Standard (Drew Dunphy, Seth Peterson, and Mark Walsh) plays rock, blues and soul with the sound, spirit and enthusiasm of the earliest rock 'n' roll combos. Formed in 2015, the trio performs regularly in the greater Boston area, at venues including Once Somerville, The Wakefield Estate, and The Milton Art Center. In early 2020, Electric Standard released its debut album, Vintage Circuitry, which was cited by Metronome Magazine for “savvy songcrafting bolstered by equally sharp musicianship.” Their latest single – “All Our Time” – is the first release from an upcoming follow-up album. More info: https://electricstandard.bandcamp.com.

Jamie Dunphy and True North features three seasoned musicians with a long history in the Boston music scene: Jamie Dunphy, Seth Peterson and Tod Salmonson. The trio formed in June of 2018 and have been performing regularly since at Boston-area venues including the Burren Backroom, Once Ballroom, Lilypad Inman, Uncharted, and the Chelmsford Center for the Arts. In January, 2022, the band released their new single, I'm Still Here, which Stereo Stickman called "a timeless pop-rock anthem, perfectly timed and beautifully crafted." In May, 2021, the group released their first full-length album, Dark Night Bright Morning, which featured the hit singles The Girl in the Boat and The Great Divide. In March of 2019 the band released their debut EP, No More Waiting, which Metronome Magazine called “nothing short of ingenious,” citing “brilliantly crafted lyrics and magnificent guitar work.” More info: https://facebook.com/jamiedunphyandtruenorth 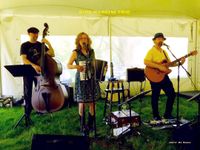 We'll be performing as a trio with John Ryder on upright bass. Concert is free and open to the public. All ages. Masks recommended. Sponsored by the Hyde Park Art Association.

Bird Mancini, The Providers & Glowbox at The Square Root 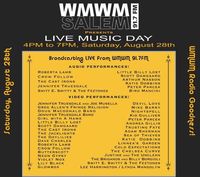 Bird Mancini duo will be playing on “Live Music Day” on WMWM 91.7FM. Many other artists too! Saturday, August 28 4pm-7pm If you’re in the Salem MA area you can listen to real radio at 91.7FM or stream anywhere in the world at https://www.wmwmsalem.com/
More info on Facebook at https://www.facebook.com/events/4192913150797156/

The Bird Mancini duo will be playing a set to launch the the 2021 Boston Greenfest! All ages will love it. The first day of Boston GreenFest opens with music, great exhibits, activities on the lawn at our EcoFunSpot (yoga, hula hoops, dance, scavenger hunt...), robots, delicious food, eco-vendors, electric vehicles, and more. Join us for an hour, join us for the whole day! More Info: https://www.bostongreenfest.org 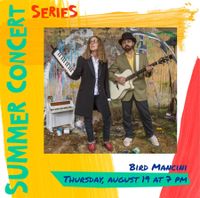 Bird Mancini duo Show starts at 7pm but you can arrive early at 6:30pm. Rain or Shine (outdoors if weather permits, indoors if raining) Food and drink will be sold Admission: Free, All ages Bring chairs or blankets to sit on! This event is sponsored through the generosity of Easton Shovel Town Cultural District, Massachusetts Cultural Council and Oakes Ames Memorial Hall. More Info: https://www.oakesameshall.org/summer-concert-series/

The Stompers with Bird Mancini duo

Ruby & Billy Carl will be opening the show for Boston's legendary Stompers.

More info about The Stompers: http://www.thestompers.com

Two acts! Bird Mancini duo and Didi Stewart! This event is free and will stream on Zoom. It's interactive so you can ask us questions or just watch and listen. For best sound, plug in external speakers or headphones. Register for Zoom Link https://zoom.us/meeting/register/tJ0ocuqqrzMuGdSHaUfeXc_RHY7BwMgQubnM

"Across The Universe-Celebrating the 80th Birthday of John Lennon"

Join us for an unforgettable evening filled with the music and lyrics of John Lennon as we remember John on what would have been his 80th Birthday, and raise funds for the historic Regent Theatre! This is a virtual online event. Cha-Chi Loprete, host of New England’s Breakfast With The Beatles and Beatle Film Archivist Erik Taros will be your guide on a voyage Across The Universe through an evening of musical tributes and recollections from musicians and artists whose lives were influenced by the legendary John Lennon. Performances by Johnny A, Sal Baglio, Barrence Whitfield, Mike Viola, Bird Mancini, Vance Gilbert, Adam Sherman, Sal and Lola Clemente, Studio Two: The Beatles Tribute, a special appearance by Denny Laine and more to be announced! Facebook Event Page: https://www.facebook.com/events/769728597138111 Regent Theatre: http://regenttheatre.com/details/across_the_universe

We're sorry to report that all music performances for the 2020 season of the Roslindale Farmers Market have been cancelled due to concerns around COVID-19.

The Stompers with Bird Mancini duo -Show Postponed due to Covid19 -Rescheduled for June 19, 2021-

Ruby & Billy Carl will be opening the show for Boston's legendary Stompers.

More info about The Stompers:  http://www.thestompers.com

If you know about this event then we'll see ya there :-)

This show has been cancelled due to Covad19 crisis. It may be rescheduled for a future date.

This event may be rescheduled for the Fall. Stay tuned....

The Bird Mancini duo be doing a set at T Max's "First Avenue Lounge" event. T Max will thrill and amaze you. We may even do a couple of tunes with T. More details coming....

Roslindale Village Main Street is excited to bring the weekly "Virtual Live Music Series" to you! LIVE on Facebook from home. The Bird Mancini duo will be playing this live streaming event on April 28, 2020. We're gonna dig deep into our back catalog for this one :-) Go to https://www.facebook.com/birdmancini at 7pm on Tuesday, April 28.